I met the Mayor of Red Rock Nude Beach on a Tuesday.  (I believe he ran for election on the Frederick’s of Hollywood Party Ticket.)  He brought his delegation of political heavy hitters with him: the Emperor of the Sand, and the Secretary of the Sea. If we had been able to get another ranger squeezed in my office, we would have had enough for a few good hands of poker.  That would have been a more productive meeting.
It seems the mayor was upset with the quality of support he was receiving from the Department.  The beach was ours and needed to be patrolled better.  Not that any of the people who came there to sunbathe were causing any problems, he pointed out.  They were all wonderful people…doctors, lawyers, stock brokers, lawyers, educators and …lawyers.  Unfortunately, he said things were getting out of hand.  (That many lawyers in one place and I had to agree with him!)  He related that only yesterday some fully clothed people had come and were actually looking at the people on the beach.  This had to stop and what was I going to do about it!  (He reminded me he had picked up litter on the beach after all.  I guess he thought I owed him?)
The problem with Red Rock Beach, besides the fact that the San Francisco Chronicle had listed it as a great nude beach in it’s Sunday Family Edition (right next to which church to attend and what movies were playing), was that it was a classic location for bouldering.  Now bouldering, for you who aren’t familiar with it, is where ordinary people who would never deliberately drink battery acid or drive with the brake lines cut on their car, go into withdrawal over not dangling by their toe nails on a rope not much larger than the thread I use to sew the buttons to my shirt.  Most of the time they don’t even use a rope for security, doing what is referred to as “free climbing.”  At Red Rock Beach they could claw their way up a rock without driving several hundred miles to find a real mountain.  Top it all off with a great view of the ocean (and the nude volleyball games) and you have the makings of a really great Saturday!
Back to the Mayor.  His problem was exacerbated by the fact that a family of four had come there, and the wife had screamed and covered the eyes of her four-year-old.  The teen-age boy had immediately been heard to yell “cool” and it took the father over an hour to catch him down on the beach.  The psychological trauma this caused the lawyers on the beach, alone, could run into the millions if I wasn’t careful.  His solution was to have two rangers patrol the beach at all times…and by the way---they need to do it in the all-together.  “I can’t have you traumatizing ‘my subjects’ with your uniforms,” he said.
It was a polite conversation, and I told him we would make sure the ranger staff spent the day pole dancing on the beach so that we could observe and guarantee all the lawyers civil rights.  I never saw them again. 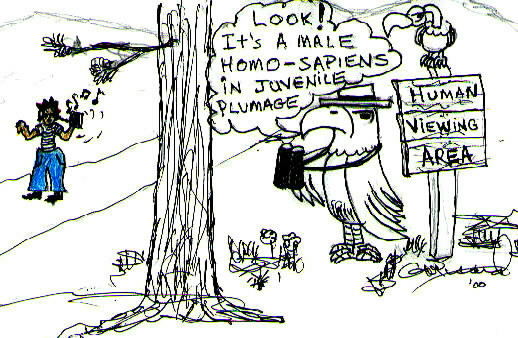